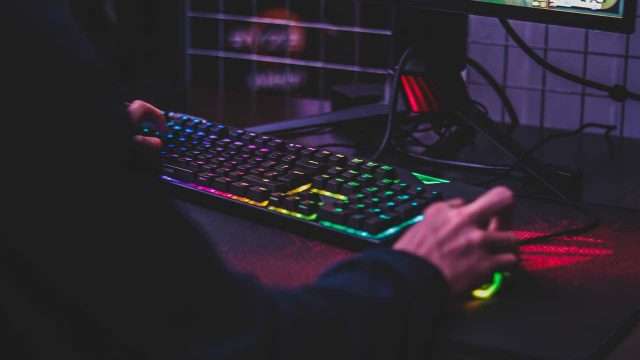 Gaming keyboards are one of the most important parts of your gaming setup.

If you want to use a keyboard for your gaming, there are many things to consider before deciding on which one is right for you.

This makes purchasing a good keyboard difficult, especially with all the options out there. To assist with this we’ve put together a list of the 5 BEST Gaming Keyboards NZ!

We’ve also included a gaming keyboard buyer’s guide so you know what to consider before making your buying decision.

Elevate your gaming experience with the CORSAIR K100 RGB keyboard.

With dynamic per-key RGB backlighting and a durable aluminum frame, it’s sure to stand out in any gaming environment.

Whether you’re a world-class competitive gamer or just trying to beat your own high score, the Steelseries Apex PRO is here to give you an edge.

Its built-in OLED Smart Display can be customized to show game stats, Discord notifications, and more, so you never have to take your eyes off the action.

Plus, its adjustable mechanical switches let you customize your keypresses for speed or precision as needed.

Its USB passthrough port means you can easily plug in your devices without having to crawl behind your PC, and its three-way cable routing prevents cables from getting in the way.

Plus, with dynamic per-key RGB illumination and millions of color options, you can create a truly unique gaming setup.

Razer’s HyperSpeed Wireless Technology ensures flawless wireless performance for gaming, while the detachable USB-C cable lets you charge during use.

The Razer Mechanical Switches provide a responsive feel and is built to last.

And with Razer Chroma, you can personalize your experience with 16.8 million colors on individually backlit keys.

Increase your precision in games with the ASUS ROG Strix Scope Deluxe.

The Stealth key lets you hide all apps and mute audio with a tap for instant privacy, then play on again with another tap.

And for extra functionality, macros can be easily managed using the intuitive ROG Armoury software.

The ROCCAT Vulcan 120 AIMO is the perfect full-featured keyboard for gaming and productivity.

Plus, the Vulcan’s housing was designed to reduce wobble and ensure that each keystroke is registered correctly.

The process of buying a gaming keyboard can be overwhelming. There are so many options to choose from, and each option has its own set of features.

In this buyer’s guide, we will help make the decision-making process easier for you by breaking down what buyers should look at before making their purchase.

We’ll also answer some questions that potential buyers might have about purchasing a gaming keyboard.

What type of switches do the gaming keyboard’s keys have?

Membrane/rubber keyboards are one of the most popular types of keyboards on the market.

They are mainly composed of a cap over a membrane, which is attached to rubber domes underneath the keycaps.

There are a few advantages to this type of keyboard. They are more durable than other types of keyboards, and they need less maintenance.

The disadvantages are that they have no tactile feedback, they do not last as long as mechanical switches, and they are more difficult to clean.

Mechanical keyboards are becoming more and more popular, thanks to their durability and tactile feedback.

The biggest advantage to a mechanical keyboard is the tactile feedback you get from the keys.

Some people say that the sound of a real keyboard as you type makes them more productive because it drowns out other noises in their office or home.

Mechanical keyboards also last longer than rubber dome keyboards, some of which need new parts every year or two.

The disadvantage to this kind of keyboard is that they tend to make a lot more noise than membrane keyboards, and people around you may not like that. They can also be a little bit heavier and thicker due to the metal they are made from.

There are a few different types of mechanical switches, each with its own set of advantages and disadvantages. Some popular types of switches are:

Blue Switches: Blue switches are tactile and clicky, making them a good choice for typists and gamers alike. They have a loud sound that some people may not like, but they offer the best feedback of all the switches.

Brown Switches: Brown switches are tactile but not clicky, making them a good choice for people who want the feedback of a mechanical switch without a loud sound.

Red Switches: Red switches are linear and have no tactile feedback or sound. They are best for gaming because they allow you to quickly and quietly press a key multiple times in succession.

Do you want a wired or wireless gaming keyboard?

Wired gaming keyboards are the traditional type of keyboard. They have a cable that plugs into your computer, and they usually give you the best performance because there is no lag time between the keypress and when it registers on your computer.

The disadvantage to wired gaming keyboards is that you are tethered to your computer, which can be a problem if you want to move around while you play.

Wireless gaming keyboards connect to your computer via Bluetooth or a USB receiver.

They offer more freedom than wired keyboards, but they also tend to have more latency (the delay between when you press a key and when it registers on your screen).

What is the N-Key rollover value of the keyboard?

This is the number of keys that the keyboard can register at once.

Most gaming keyboards have a N-Key rollover value of six or more, meaning you can press up to six keys at once and they will all register.

This is important for gamers because it prevents missed keypresses during intense gameplay.

What are the backlighting options?

Backlighting allows you to see your keyboard in the dark. It is an especially useful feature for people who play games in low-light conditions or want the coolest-looking gaming keyboard.

Most gaming keyboards come with a variety of different backlighting options, including:

Static lighting: The lights stay on one color continuously.

Breathing light: The lights turn on and off in a wave pattern.

Color cycling: The lights cycle through different colors automatically or when you press a key.

Ripple lighting: There are several zones of light, and the lights spread out from each pressed key across those sections.

Does the gaming keyboard have extra macro keys?

Macro keys allow you to program many commands onto one button so that it is easier for gamers to remember which function goes with each button during gameplay.

Some gaming keyboards come with around six macro keys, but others have more than 20! That means they can accommodate even the most hardcore gamer’s needs by allowing them to create dozens of macros per game or application.

What size gaming keyboard do you need?

Most gaming keyboards are the standard size, but some smaller and larger ones exist.

Smaller keyboards have a shorter distance from one key to the next, which means that each individual key is slightly larger than it would be on a full-size keyboard. This makes them easier for people with large hands or fingers to use because they do not need to move their fingers as much in order to press another button.

Large gaming keyboards have macro keys across the top of the board so you can program macros without having your hand leave the home row (the QWERTY section). They also often come with additional buttons such as media controls and backlighting options that may not be included on other boards due to space constraints.

Ergonomics is about how well the keyboard feels in your hand, not just whether it looks cool. Gaming keyboards come with either an ergonomic or a standard design.

Standard designs are traditional flat keyboards that have no contours for your hands to rest on during use. They can strain your wrists and make them hurt after you’ve been typing for awhile because they force you to hold your arms at awkward angles while playing games. Ergonomic gaming keyboards solve this problem by curving upwards slightly near the top of the board so that gamers’ arms fall into natural resting places as their fingers move across the keys.

How to watch It’s Always Sunny in Philadelphia on NZ Netflix...

How to watch Spiderman No Way Home on NZ Netflix (June...

Home June 13, 2022
© We want to help you make the right buying decision. ProReviews is reader-supported. When you buy through links on our site, we may earn an affiliate commission.